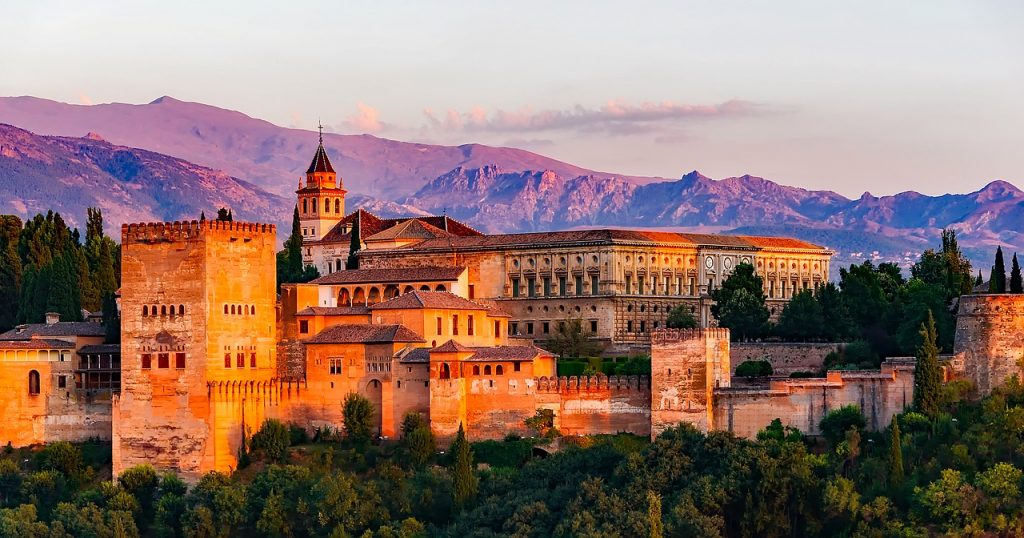 As featured in the Irish Times

Oh, Granada Spain! Of all the cities and pueblos on the Iberian Peninsula, this one may be the most Spanish—and I mean that in the best way possible. The city shares its name in Spanish with the pomegranate. And much like the fruit, the city has a tough exterior. But its insides are lush and delicious.

For many of us extranjeros (foreigners), Granada’s beauty and architecture are what many of us imagine when we think of Spain. From its origins as a small Iberian settlement in the 5th century BC to the seat of the last Moorish stronghold, this city has been charming every inhabitant and passerby, and tourist for centuries. Just ask Washington Irving.

Like most of Spain, the city has had many lives. But in my humble opinion, Granada has the best evidence of its spectacular past--the Moorish Palace of Alhambra. And while you are in town, you can stop off for some Sangria and enjoy tapas that comes with it. Just steer clear of the paella, save that for a trip to Valencia.

But whether you stay in Granada for three days or a month, here are the sites you simply must see!

By the way if you're travelling with children, download this fun free colouring page for them to enjoy: 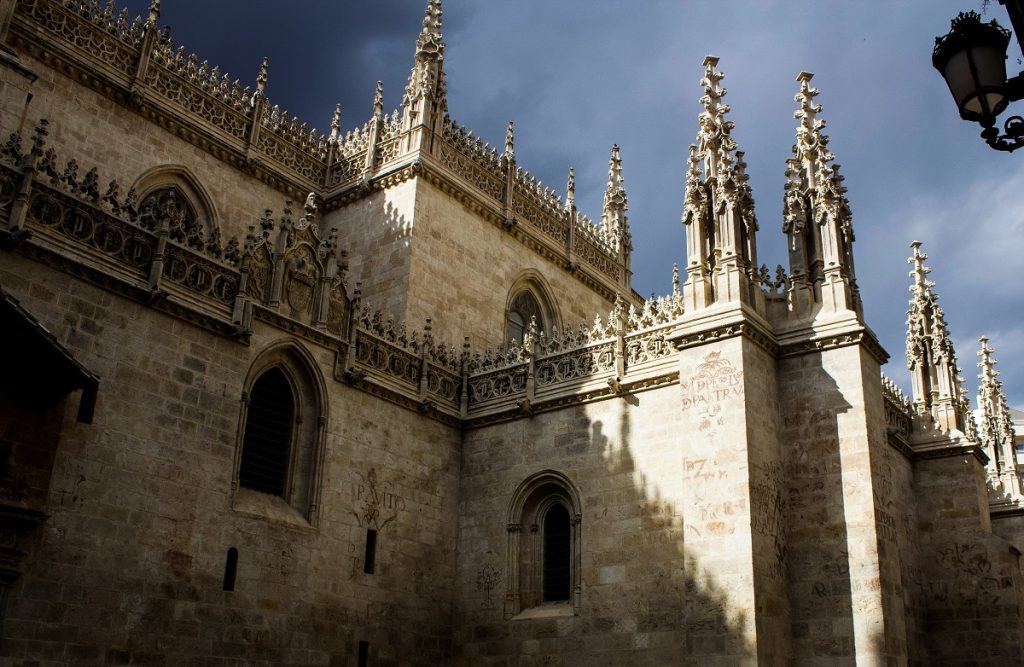 Commissioned by Queen Isabella 1523, at the Granada Cathedral is a masterpiece of the Spanish Renaissance style and a physical embodiment to the triumphant will of the Catholic Kings. As the fourth largest cathedral in the world, it was the crowning glory of the Reconquista or re-Christianisation of Spain. As Granada was the last of the Muslim strongholds on the Peninsula, Queen Isabella wanted to mark the success of the Reconquista in Grand Fashion.

Built on the remains of a mosque, its impressive façade spans the length of the plaza. Visitors notice that the Cathedral expands nearly all of the block. The site is open for visitors nearly every day of the week. And if you call early for reservations, you may be able to attain free entry. While there are many impressive churches and cathedrals in Europe, the Granada Cathedral is one that truly must not be missed.

2. Next Up: Sierra Nevada Mountains

While snow, skiing and mountains may not initially spring to one’s mind at the mention of Andalusia, the Sierra Nevada mountain range is actually home Mulhacen, the third highest peak in Europe. Perched among the peaks is southern-most the ski resort on the continent. And as Spain’s weather is notoriously sunny, that means that there are more clear days for you to head down those slopes.

And if skiing isn’t for you, or the season is out, there are plenty of hiking trails leading out from the city to the mountains. This wonderful blend of urbanisation nature is one of the many delights that this glorious city has to offer. 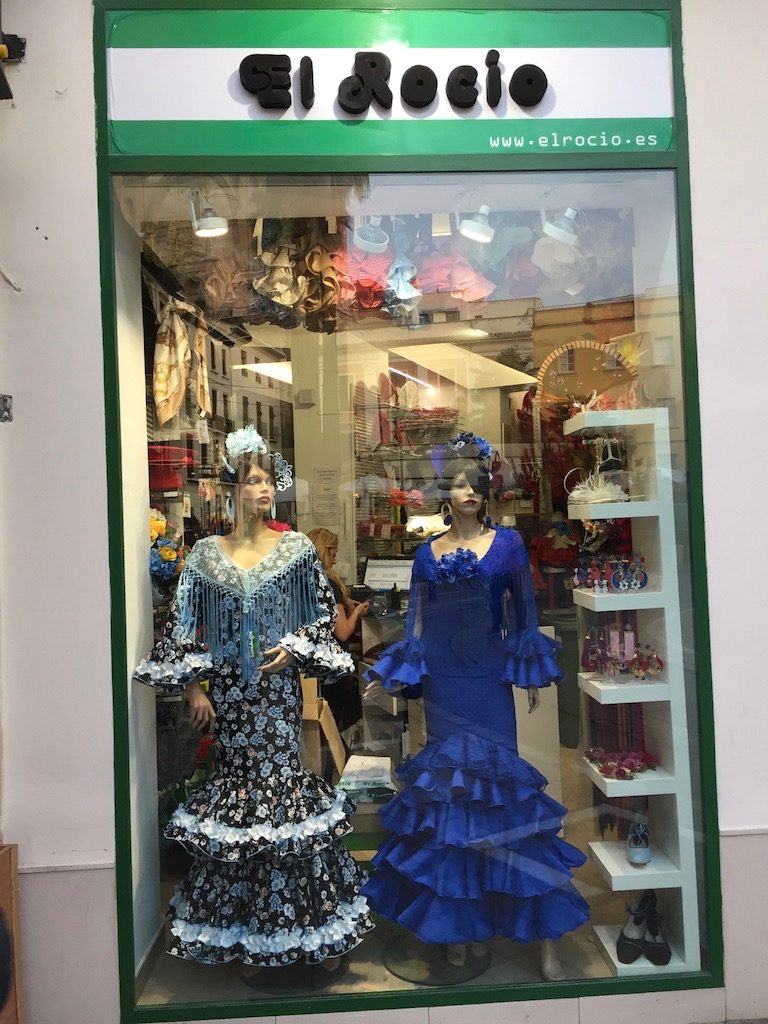 Images of Spain and Flamenco are as intertwined as café con leche. A social dance spread from the caves of the gitanos (gypsies) to the cafes of Andalusia. Throughout the region, you can “feel” spirit of flamenco in the air. And if that wonderful dancing breeze leads you to one of the many shows put on daily, consider yourself lucky.

For a truly “authentic” experience, you should check out the show in the Sacromonte Caves. The show and sets are arranged horizontally, so everyone will have a great seat. However, authenticity comes with the price—in this case that means heat. While, you won’t be the one dancing, you will also be sweating. But take it in stride. It is all a part of the experience. 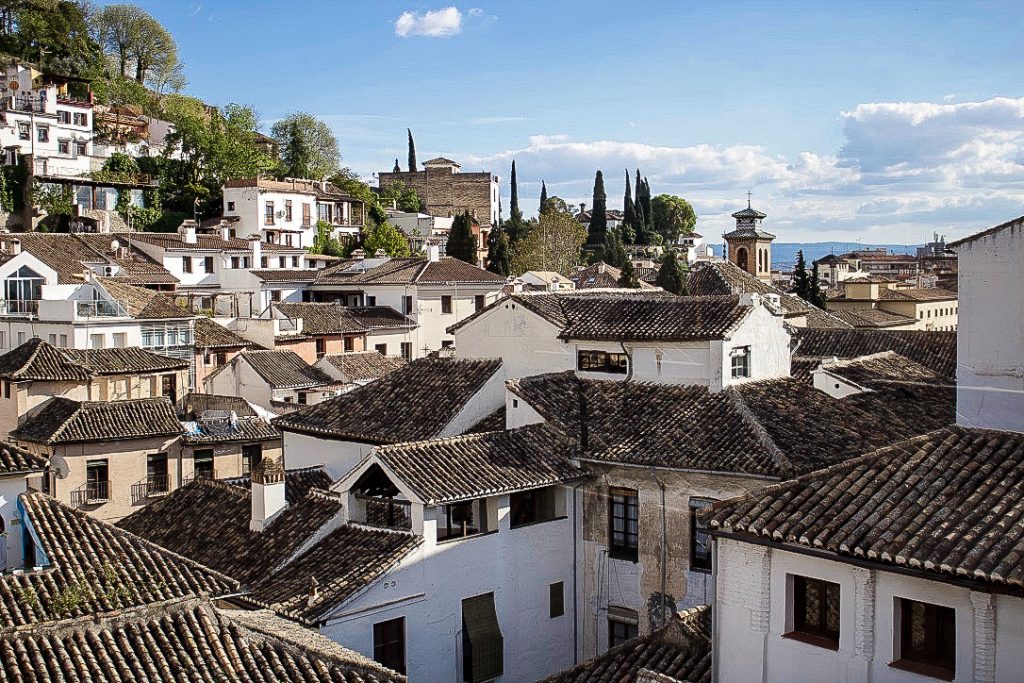 Next up, take a walk to the heart of this beautiful city in the winding romantic roads of The Albaicín or Albayzín. A world heritage site since 1984, the history of this district extends back to the Nasrid Moorish Kingdom of Granada. All the houses are white with the beautiful wrought iron terraces that Spain is famous for. 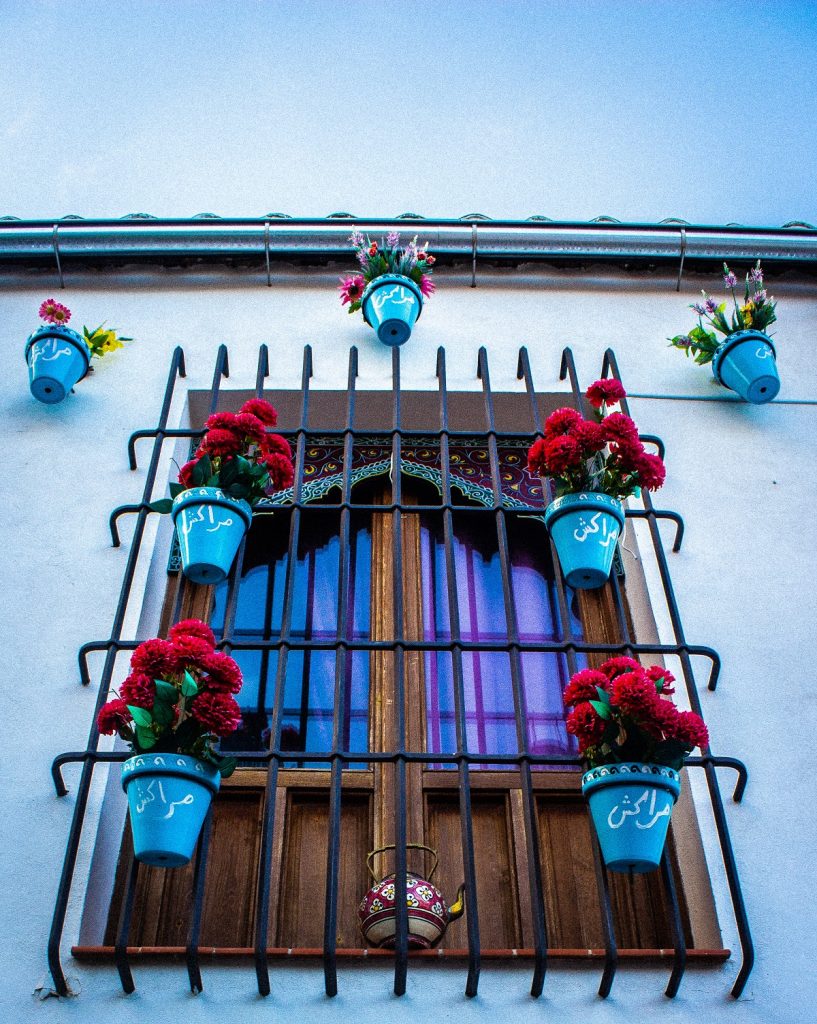 While it is beautiful all year round, in the springtime, the district truly comes alive. The smell of jasmine roams through the air. But before you go, you should know that the region is also popular for the modern-day Spanish hippies. But don’t be alarmed. They too add to the city’s charm. With their sandals and mullet dreadlock hairstyle, you will often find them with guitar or flute in hand. As you walk the streets, music and fragrance are there to greet you. Seducing you to fall head over heels in love with Granada.

And at last here we are at the pièce de résistance—Alhambra. This medieval Islamic palace/ citadel is one of the most visited sites in Europe. The former residence of the Nasrid kings who named their home Alhambra or Red Castle.

Understating the beauty and grandeur of this palace is virtually impossible. The ornate geometric Islamic designs line the interior leaving visitors feeling transported through time and space. There is beauty around every corner, glory in every ceiling tile. After your scheduled visit here, you will curse the universe that you were destined to live life outside of those red walls.

One thing to know before you visit, however, is that tickets sell out months in advance. This is not your average museum, don’t show up and expect to gain entry on the same day. You will be sorely disappointed. If you do end up making an unexpected trip, however, you may be able to find a group tour. Just be aware that many of those tours put a time limit on your excursion. Here is the official site for tickets.

So, there you have it! A travel guide to all the sites you must visit in Granada. I’m sure that you’ll enjoy your stay. And much like the seeds of the pomegranate, after the first taste, you’ll come back for more. 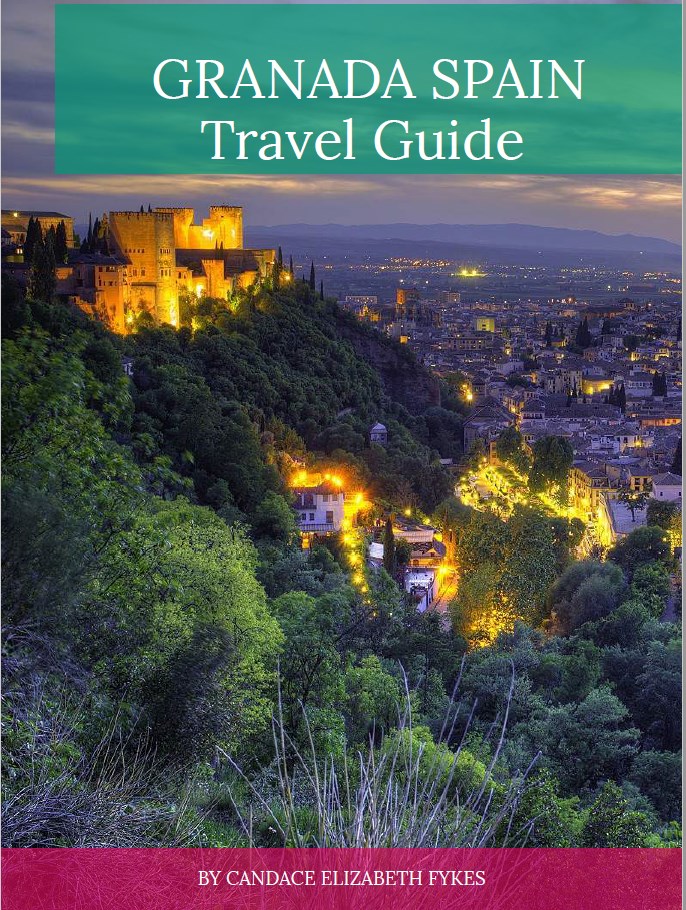 Other Cities in Spain You May Enjoy

Candace hails from New Jersey, but has considered Spain her new home for around three years.

She writes some great articles over on her blog, with a fresh perspective on expat life in Spain, injected with plenty of personality and humour.

Check out her blog and follow her on her social media channels, on the links below. 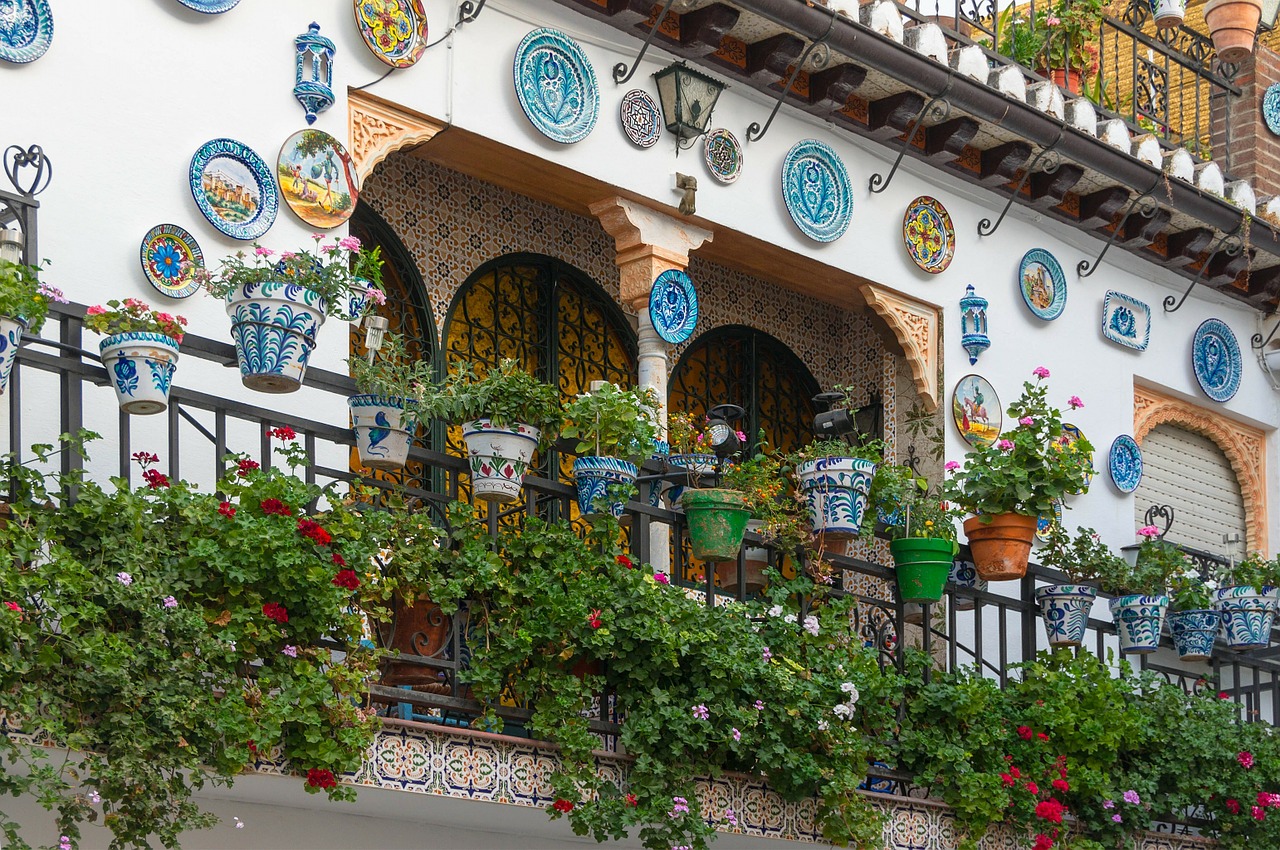 How To Get There

Granada-Jaen Airport: Here you can see the airlines and destinations

Málaga, which is Andalucia’s main airport, is located 127 km from Granada.

This extremely busy airport is very well served, you can see destinations here.

Discover an authentic olive oil route in the region of Granada

Learn more about other parts of Andalucia and the Costa del Sol.

Jackie De Burca is is a travel, arts and culture writer. The author of Salvador Dalí at Home, De Burca has spent much of her life in Spain since 2003. Originally from Dublin, Ireland, she is the creator of Travel Inspires: the authentic travel magazine by the people, for the people. She mentors aspiring writers around the world, who have the opportunity to showcase their work on Travel Inspires. De Burca feels an inspirational connection with the land in Spain, while maintaining her deeply rooted attachment to Irish landscapes, soil and of course, the Irish character.